Having been in Vietnam for a little over a month and to date had only been doing AOR patrols and a couple of small operations we were still becoming acclimatized to the tropical heat and living in another country.

We were informed on the 10th May that we would be going out on a major operation on the 12' May so we were to set to and get all of our rations, ammunition and water bottles packed in readiness to move out. It was typical army style of hurry up and wait, we spent half of the day waiting on the kangaroo pad for choppers to pick us up and take us out to Coral, it was most unpleasant sitting waiting in the scorching sun, and now I realise this was only the commencement of the many errors that would occur during this operation.

The time we were taken out was the first error and the mistaken location we were dropped in was the second. 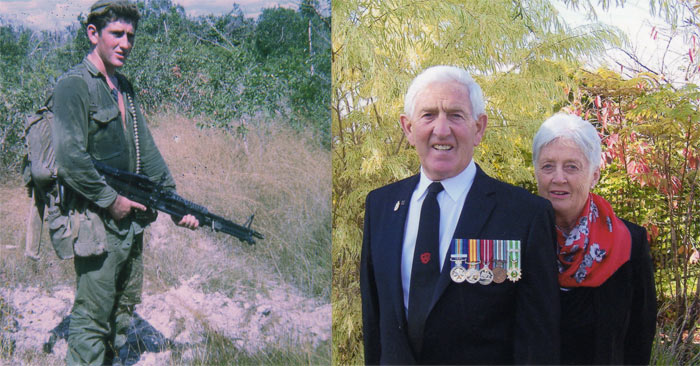 ​Eventually around mid-afternoon the choppers finally arrived, when B Company finally hit the ground we were told that we were to go about 2000 metres to the east as a listening post, we seemed to take for ever to make headway through thin, sparse scrub and we were laden with all the extra water and ammunition that we needed to carry, I remember sweating profusely therefor making things far more unpleasant.

As we were moving toward our position we were required to cross a small clearing, it was here our forward section made contact with some enemy, there were no known causalities and the enemy disappeared.

At this point I realised we were in a war zone and this was a life or death situation, something that had not entered my mind before.

We moved into our ambush position very late in the evening, we had to dig shell scrapes before we settled down for the night. There was a track in front of us, my gun was set up covering the track and everyone in the section was required to do picket on my gun throughout the night, I did my two hours along with my Corporal, we heard movement extremely close on the track in front of us, it sounded very much to us that the enemy were dragging their wounded, from the earlier contact.

It was pitch black and my corporal decided quickly to lie low and make no contact as we were unsure as to the number of the enemy.

Throughout the night we could hear a lot of activity to the west, in the direction of our support base and were informed in the morning that part of the support base had been over run by the enemy, the enemy had knocked out an artillery gun and taken a mortar position, our diggers quickly reclaimed the mortar position and there were many casualties on both sides.

Just on dusk back at our position we heard a mortar primary discharging and then an explosion to our front, we realized the enemy knew our position and were walking their mortars towards us, the fifth mortar hit a tree resulting in the death and serious injury to two of my mates, who at the time were doing picket beside me on my machine gun, I never had time to think about being frightened, my instincts and training kicked in and it was time for me to take over my machine gun. A dust off helicopter came in to evacuate both Bevan and Max, a memory that will stay with me forever, all the training in the world could not have prepared me or any soldier for what had just happened, seeing your mates killed or wounded and feeling so helpless.

As that day passed and the following days I wondered how Max was and where he might be, and knowing Bevan had been killed I felt for both of their families.

Later that morning we went back to Coral support base to form part of the perimeter and when we arrived we were instructed to dig deep pits in case of more mortar attacks.

Our platoon was part of a clearing patrol and during this patrol many enemy bodies were discovered and also there was evidence that many bodies had been dragged away, a grizzly and gruesome patrol; to be involved with.

There was amazement at the amount of enemy shell scrapes that were in the area, and there was realisation as to just how large the enemy force was, estimated around 4000.

The next two night were relatively quiet, but on the 16' May, the enemy force struck again attacking through "A" company position, which was to our left.

Being dark when the attack happened we were instructed to light our hexamine stoves in front of our gun pits to enable the gunships to identify our perimeter, it was a terrifying experience when the corner light was extinguished by the heavy rain, and then the gunship came through between our pits/ firing rockets and rounds.

The battle lasted for quite some time with infantry putting up a courageous fight and being well supported by the mortars and the artillery guns and not forgetting the gunships, and naturally there was snoopy and the red line tracer "he" created coming from high in the sky, again there were many casualties.

Our forward scout was severely affected by battle fatigue and that caused him to crawl into my pit beside me, making conditions more uncomfortable. The poor man never recovered from that night, next day it was back to Nui Dat and by the time we returned from the operation he was back in Australia. He has never been able to confront any of the "boys" and it was 1999 before I called and saw him, and he told me he felt he had let the "side" down and sadly he feels he cannot join in our annual reunions.

I had never witnessed a more severe thunderstorm than the one that night, the torrential rain and at times the lightening was so bright the enemy could be seen in the distance, by morning we were sitting in eighteen inches of water in our pits. Later that day the clean up had to be done and a bulldozer was bought out to excavate a large grave where the enemy bodies were buried, another horrific task.

A few days later we moved position and we were required to dig double gun pits with three foot overhead cover as there was fear of a rocket attack, this was a big job with a very small shovel, believe me it was like sleeping in an oven.

We spent many days patrolling the area with only minor contact with the North Vietnamese.

The Tanks were to go the Fire Support Balmoral, which had been set up by 3 RAR about 5 kilometres from Coral, somehow B Company drew the short straw, and we were to be the escort for the tanks, on the way contact with the enemy was made yet again, this time with no casualties. Balmoral was attacked on the 26'n May and that was where the tanks certainly proved their worth.

Overall 1RAR and 3RAR were at Coral/Balmoral for 25 days resulting in the death of 26 Australian Soldiers and 109 wounded in action and approximately 270 enemy deaths. In those 26 days we had no change of clothes and at times we were very short of drinking water.

As a twenty one year old conscript, the events of Coral/Balmoral will stay with me forever and as Coral occurred at the beginning of our tour of duty in South Vietnam it made me realise it would be a long hard struggle to survive the next months, will be forever haunted by the horrors of war and mates will always be remembered.