A summary of the Australian R.A.N. servicemen's experience, a man who served on HMAS Sydney in the Vietnam War in 1965. 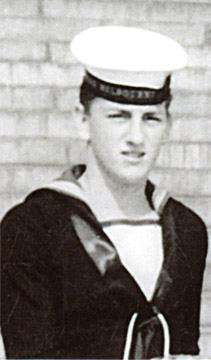 Dennis Gist was a member of the ships company on the Troop Carrier H.M. A.S Sydney. In early May 1965 the Federal Government placed the ship on “Active Service” to enter the Vietnam War. Their goal was to provide logistical support to our forces in the war against communism in South-East Asia. This was the first “Operational Deployment”. We only had 4 separate Bofur guns. The Sydney was loaded with high explosives, fuel, tanks, trucks, artillery and Agent Orange. The Agent Orange chemical was sprayed on the trees and shrubs to defoliate them and prevent the enemy concealing themselves shadow of the bushes.

The ship had been clad in part with Blue Asbestos sheeting so this also was a hazard to the troops on board. The ship was crowded with equipment and 1 RAR soldiers, and men had to sleep where they could. There was no air-conditioning, and skin infections occurred and cockroaches infested the ship, sometimes biting the sleepers. The drinking water became contaminated with Agent Orange.

Our task force consisted of H.M.A.S. Duchess, H.M.A.S. Melbourne, and the H.M.A.S Sydney.

Action we were surrounded by in the harbour at Vung Tau included mortar fire, gun-ships firing towards the shore and helicopters, and we were continuing the non-stop unloading of our ship, including munitions and men of the armed forces. The ship had to be protected from being mined. Throughout the sounds of battle were a new experience for the men, and added to their stress.

U.S, navy ships were sunk in Vung Tau Harbour, and we learned of a US helicopter being downed, the crewmen tortured and murdered.
The President of Indonesia stated we would blow the “Sydney” out of the water.

We headed back to Australia and commenced a second deployment in September 1965. While in Australia we encountered an atmosphere of protests against our operations and media scrutiny. The second journey to Vung Tau involved calling in to Brisbane to pick up army personnel and supplies.
The Australian Government decided not to recognise us for war-service benefits, and not to recognise the Task-Force ships who did escort duty, nor the R.A.A.F. Neptune Bombers, and the failure to show thanks for their service was a blow to the servicemen, who had volunteered and were prepared to give their lives if necessary.