Canberra A84-307 was constructed in July of 1951 as a B1 bomber version of the English Electric Canberra and purchased at that time by the Government of Australia.

In August of 1951 A840-307 was flown to RAAF Laverton in Victoria where it was taken on charge by the RAAF. A840-307 is the first Canberra to see service with the RAAF where it was issued to the Aircraft Research and Development Unit (ARDU) for which it undertook many high altitude high speed test flights over a 5 year period. The tests were designed to give the RAAF its first understanding of high altitude airframes and jet engine design.

Late in 1956 the aircraft suffered serious damage in a mid air incident; the aircraft was able to reach ground safely but both wings were so severely damaged that they needed to be replaced. Whilst the wings were removed, it was decided to convert the aircraft to an Mk21 trainer version while waiting for the new wings, a process that took 2 years over 1957-58.

In November 1958 A84-307 was issued to No6 squadron Amberley where it operated until 1964 when it was transferred to RAAF Butterworth in Malaya where from 1964 - 1966 it took part in continuation training and instrument rating tests for crews operating over Indonesia during their confrontation with Communist forces. During this period A84-307 received further modification as part of the clandestine Transport Support Flight (TFS) and took part in the Lone Ranger missions to Hong Kong as bomber versions of the Canberra were not allowed to operate outside Malaysia.

No2 Sqn RAAF was deployed to Phan Rang Air Base in South Vietnam in April of 1967, 307 remained as part of TFS for instrument rating tests of pilots at Phan Rang. 307 deployed to Phan Rang for one or two week periods for the instrument rating tests by QFIs. 307 returned to Australia in late 1968 for a major overhaul after which it was allocated to No1 Bomber Operational Conversion Unit for 2 Sqn crews in Phan Rang.

A84-307 was retired from squadron service in August of 1973 and allocated to No1 CAMD at Kingswood for static display at which time is was the sole surviving example of a dual control (two pilot) model in the world.

After years of stagnation since its phase out of service in 1973 a capable and experienced aircraft restorer Colin Grey OAM, rescued the Canberra from the scrap heap at a decommissioned airfield at Kemps Creek NSW. Colin estimated it would take about six years to complete a full restoration of the bomber, which he has gifted to the National Vietnam Veterans Museum.

The restoration of this aircraft will entail the removal of all fixtures, fittings and furnishings from the airframe. The airframe will then need to be broken down to its major componentry and then each component broken down as condition requires. Although the airframe looks reasonably sound from the exterior the airframe is made up of mixed aluminium alloys, alloy steels and other dissimilar metals which over time have reacted with each other to form highly corrosive oxides. In particular, the many thousands of parts manufactured from magnesium alloy (magnesium is euphemistically known as magic metal for its ability to disappear) a very light but strong material that is susceptible to corrosion thus has a very short operational life. Therefore, virtually every component of the airframe will have to be dismantled to be refurbished, repaired and replaced.

To undertake this work a multitude of workshop equipment, fixtures, jigs and other equipment will need to be constructed to facilitate the restoration. A wide range of specialised pneumatic tools to work with the various alloys present are also needed. By virtue of their type, design and construction this equipment and these tools are highly specialised with many needing to be built from scratch by our volunteers.

Work is currently underway to remove all of the fixtures, fittings and furnishing from the forward section of the fuselage. For the most part these are complete and in reasonable condition. However, the alloy components of many of the pieces have been riveted together with magnesium alloy rivets and all structural strength has wasted away. In this case a paint strip, de-corrosive process, reassembly with aluminium alloy rivets and a new finish with appropriate paints and finishes will complete the restoration work. 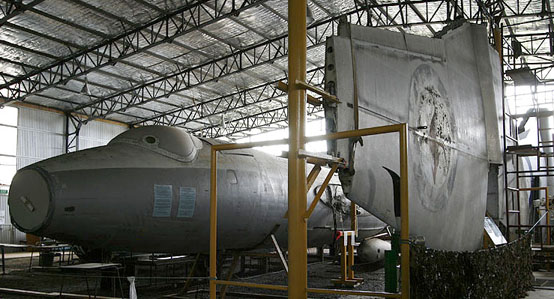 Also located at the museum is a collection of tools and metal machining equipment required for use on the restoration. The long duration of the project would require the Canberra being in place at the museum during restoration and this necessitated the need to provide suitable covered accommodation for the Canberra for both restoration and public viewing. Members of the local Oceania Aviation Museum, who had successfully completed a Japanese Zero Fighter project for use in a movie, have undertaken the restoration of the Canberra. This job is going to be expensive so a variety of funding options will be activated (grants and sponsorships) as the project progressively unfolds, including permitting public access to view the restoration. Albeit the bomber will never again be airworthy, both of the Rolls Royce Avon Jet Engines have been refurbished as part of the restoration process. By any measure A84-307 is an historic aircraft worthy of museum display but it is its Vietnam association that warrants its place in the National Vietnam Veterans Museum.

Work continues on the Canberra - the conservation of the tail mounted radar unit is complete save for the identification marks for each of the electrical connections; the entrance door has been removed and dismantled, restoration work has begun on the main structure; and ailerons have been prepared for paint preparation.

With the decision to suspend all work on the second Wessex and focus in on the Canberra bomber restoration we will see increased activity around this program in the second half of 2014. A range of new-old stock components previously identified and pre-packed at Nowra – gifted to NVVM by the Fleet Air Arm Museum - will be freighted down courtesy of the generosity of our museum corporate sponsor IAS. In addition, Temora Aviation Museum holds a large collection of new-old-stock Canberra parts for the external panels of the airframe and in July 2014 an Oceania team will travel to Temora to select and pack those parts for freight to the NVVM.

Work on the Canberra is progressing with the air conditioning system auxiliary gear box and hydraulic pump removed from the starboard wing and the remainder of the engine cowls removed from the port wing. Whilst externally stored at CAMD Orchard Hills the top of the fuselage acquired/grew a large garden of moss and lichen which has also been removed, as have the wing fairing attach angles. A somewhat battered set of engine cowls came with our Canberra and all are receiving some attention at present.

Recently with support from two Bass Coast Shire Councilors we were able to purchase a large proportion of the Avionics suite for our Canberra which is awaiting transport from Brisbane to Phillip Island. In late June two of our volunteers travelled to Temora in response to an offer of assistance from the Temora Aviation Museum to provide a collection of new-old-stock spares to assist with the completion of our Canberra. A busy three days were spent pouring over spare parts manuals, computer files and other sources compiling lists of needed parts. The opportunity for the NVVM to gain access to the collection was made possible through a reciprocal museum to museum exchange program.

Compilation of a parts list identifying the number and type of parts required for the Canberra program is ongoing however we have identified quite a number of external airframe components such as doors, access panels, hatches, wheel and brake components and a wide range of nuts bolts a variety of fasteners and special tooling which are available as new-old-stock items. The correlation of the part numbers against the description, part number and quantity required per airframe can now continue as we have found the illusive Book 2 of the 5 part Illustrated Parts Book as many of the identified items are listed in Book 2.

Work to rebuild the main support brackets in the main wheel bay of the Port wing is underway as is the manufacture of new wing fairing and trailing edge fuselage attach points, the wheel bay support brackets also require replacement with new pieces as they are beyond recovery, the ailerons and wing flaps for the most part have surface corrosion but all of the attach points, bearings, actuating rods and hinges will need replacing.

Work on the starboard Rolls Royce Avon turbo jet is continuing to remove the small areas of corrosion that appear on all parts of the engine that in itself is a time consuming task however the work to loosen all of the frozen nuts bolts and other fixtures on the engine that has been externally stored for some 30 years is proving more of a challenge. This program has also had its interruptions this year with the restructure of the museum and the fabrication/construction of various pieces of equipment for NVVM projects. The AN/APN-119 tail mounted Doppler radar transmitter unit has been restored and is on display in the museum.